Life on the Moon: My Best Friends Secrets (A Multi Ethnic Collection of Short Fiction) 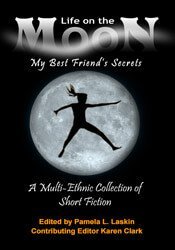 Life on the Moon: My Best Friends Secrets (A Multi Ethnic Collection of Short Fiction)

LIFE ON THE MOON: MY BEST FRIEND’S SECRETS is a collection of stories written by both published and unpublished writers. In fact, many of the pieces are by student writers, who have taken either graduate or undergraduate children’s writing, and who have reaped the rewards of extensive reading of young adult texts.

Clearly, you will not be able to distinguish who has significant publications, and who does not, nor is this the purpose. In fact, the concept behind this collection is to delve into the important issues in this genre, and to generate an anthology not only based on these issues, but to help inspire students in Children’s Literature classes to write professionally, and think of themselves as writers.

This book is an important book in the field of Young Adult Literature precisely because there is no stone left unturned, and students in this course can begin to see themselves as writers. This is the ultimate goal of a creative writing class, in particular, a course in Children’s Writing: to train a new generation of readers and writers who understand the specialized needs of the writing for teens. LIFE ON THE MOON: MY BEST FRIEND’S SECRETS understands the teenage audience, both its secrets and its soaring journeys-to the moon and beyond!

Reviews
This powerful and important collection of stories will touch the heart, affirming not only for the writers who are telling their stories so eloquently, but for each reader who is touched by the gift these women bring us-making us remember again and again what it was like to be young, lost and ultimately, redeemed.

Be the first to review “Life on the Moon: My Best Friends Secrets (A Multi Ethnic Collection of Short Fiction)” Cancel reply