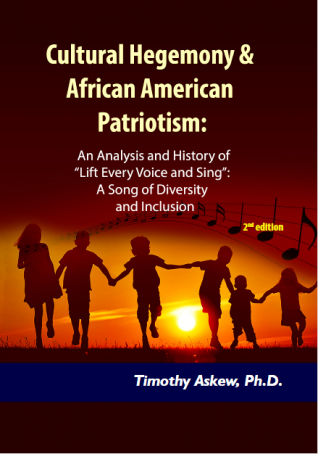 Dr. Timothy Askew has written a fine book that many students and scholars will find engaging and most relevant to their educational, social and cultural experiences. The book recommends itself for the voice it gives to the relevance of a single musical composition, which has inspired people for many generations, and the insights it offers in interdisciplinary studies. The book is a refreshing addition to American scholarship and will be useful to students of American studies, African American Studies, literature, music, and cultural studies.

Dr. Timothy Almon Askew holds a B.A. degree from Morehouse College, Summa Cum Laude with Phi Beta Kappa distinction as a junior-year inductee. He received the master’s degree at Yale University. Dr. Askew was an NCEA Doctoral Fellow in the English Department at the University of South Florida. Pursuing an
interdisciplinary degree in American Studies and focusing on American Literature and American Music, he received the Ph.D. degree at Emory University and had the distinction of being the first Ph.D. Marshal at the University. He is the recipient of numerous awards, including a 4-year Academic Scholarship, Morehouse College; Readers Digest Foundation Scholar, Morehouse College; University Fellowships, Yale University; National Consortium for Educational Access Doctoral Fellowship, The University of South Florida; University Fellowships, Emory University; The United Negro College Fund Dissertation Fellowship; Teacher of the Year, Clark Atlanta University; The N.A.A.C.P. Image Award for Excellence in Teaching English, Clark Atlanta University; National Endowment for the Humanities Scholar. Dr. Askew was the Atlanta Public Library “Lift Every Voice and Sing” Centennial Celebration Speaker at Georgia State University and has been featured in the Atlanta Constitution for his research on the song, “Lift Every Voice and Sing.” Dr. Askew is a tenured Full Professor of English and Humanities at Clark Atlanta University. He is the Founding President of Phi Kappa Phi Honor Society at Clark Atlanta University and a Sustaining Member of Phi Beta Kappa. He is the author of the following books: Cultural Hegemony and African American Patriotism: An Analysis of the Song, “Lift Every Voice and Sing” and Refreshing The
American Literary Canon, both by Linus Publications, New York. Dr. Askew is the 2017 C. Eric Lincoln Scholar at Clark Atlanta University, one of the highest honors bestowed on a professor at the university.

Be the first to review “Cultural Hegemony & African American Patriotism: An Analysis of the Song Lift Every Voice and Sing (2nd Edition)” Cancel reply