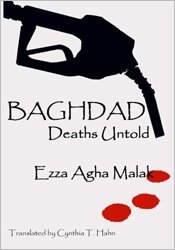 This contemporary novel, based on true events, depicts an unusual love story, between an American woman journalist at home in Lebanon and a Lebanese journalist who grew up in Palestine, whose family left to seek refuge in Lebanon, and who then fled to Iraq with his American wife in order to avoid becoming ensnared in corrupt politics. The Lebanese author, Agha Malak, harshly criticizes all the political players and groups described (from Yassar Arafat, to George W. Bush to Saddam Hussein). The couple’s daughter, a symbolic and concrete union of East and West, becomes an innocent victim of war, wounded in crossfire. The love story, with its demonstration of cultural bridging, threads a positive note of optimism and peace in this novel set in a recent historical context fraught with violence. The novel ultimately critiques the abuse of power in all its forms, and puts a human face on the suffering induced by war. What drives the storyline is a continual quest for “truth,” The novel invites careful reflection on recent Middle East conflict, by portraying various perspectives, some of which have not had extensive exposure in Western media until now.

Ezza Agha Malak, of Lebanon, is Professor Emerita of the Université Libanaise and the Université Saint-Joseph (Lebanon), where she taught French linguistics and literature. Awarded the title of Chevalier de L’Ordre des Arts et des Lettres by the French government, she holds two PhDs from Lyons II (France), and has received awards for her numerous collections of poetry, short stories, and novels in French.

Be the first to review “Baghdad: Deaths Untold” Cancel reply