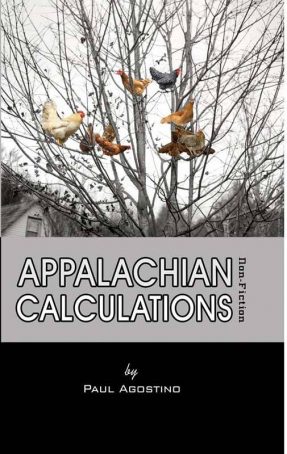 “They say it’s a small world, but it doesn’t even seem like a small woods when you’re lost in it.”

Appalachian Calculations is a New Yorker’s view of small-town Southern mountain culture.The book will take you on many backwoods hikes and backroad misadventures to hidden places where discoveries of great worth are made.  You will be introduced to the people and history of the area, learn about local customs and characters, and listen to small-town tales and legends.

So take a chance and take a trip with the author, who says:

“I don’t know what it all means, but if I were to guess, maybe it’s this: You’re never far from where you want to be, and you’ll know that place when you reach it. It just takes a little risk, a little effort to get there.  And you get to see a whole lot of things you never would have when you take those unfamiliar, unplanned paths on the way to your destination.”

Paul Agostino was born, raised, and still lives at sea level, but he much prefers the mountains. In spite of living his entire life on a narrow island, he is a poor swimmer. He lives and works in suburbia, but is indifferent when it comes to lawn care. He has taught writing and literature at Suffolk Community College for more than two decades. Before that, he worked as a cook. As an adolescent, he had a paper route. He has published widely in magazines, journals, and anthologies of various size and weight throughout the years. He owns, edits, and operates Headlock Press, with the goal of publishing “writing that grabs and holds.”

He is enshrined in the Wiffle Ball Hall of Fame, located in Holbrook, NY.

He has no pets.

Be the first to review “Appalachian Calculations” Cancel reply